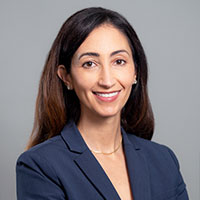 Joelle Rocha is a partner with a focus on real estate development and land use; she also represents clients in business disputes and general commercial litigation. Previously, she served as Assistant to the Solicitor for the towns of Warren and Lincoln. She is admitted to practice in Rhode Island and Massachusetts.

Joelle has successfully permitted several of the State’s largest mixed-use developments. She has represented private developers in residential, commercial, mixed use and solar projects and before municipal and state boards and agencies. She has secured tax stabilization agreements for several private development projects.

She has successfully litigated several class actions against municipalities regarding illegal and excessive impact fees and building permit fees, and recovered litigation costs for landowners and developers as a result of unlawful and unsubstantiated government actions. She has argued before the Rhode Island Supreme Court on behalf of several clients in matters involving recovery of attorneys’ fees and challenges to local ordinances.

Joelle has been recognized by Providence Business News with its Forty Under 40 award, by Super Lawyers as a Rising Star, and in Rhode Island Monthly both for its Excellence in the Law and Outstanding Women in Business award.

Active in the community, Joelle is a member of the Board at the Ocean State Montessori School and a member of Rhode Island Builders Association and its Legislative Committee. She is a former board member of Roger Williams University School of Law Alumni Association and the Rhode Island Soccer Association.
Super Lawyers Rising Star, 2011
Providence Business News Forty Under 40, 2018
RI Monthly Excellence in the Law, 2019 and 2020
RI Monthly Outstanding Women in Business, 2020
University of Massachusetts (Dartmouth) Distinguished Alumni Award(2018)