by Michael Sweeney & Samuel Eckel | For business owners looking to make an exit from their companies, 2018 has more than a bright outlook; in fact, trend analysts theorize that it could be a banner year for middle-market M&A deals.

M&A data from 2017 deal studies, reported exit metrics and industry chatter, point to another very strong year, especially in the lower middle M&A marketplace, which (for this blog) comprises deals up to $200 million in enterprise value. The charts below from Pitchbook, one of the industry’s go-to sources for comprehensive M&A, private equity and venture capital information, show two major indicators — deal value and average purchase price multiples – hitting high points in 2017. 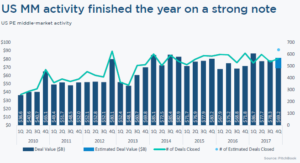 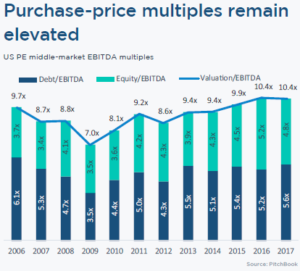 Pivotal to 2018 is the new Tax Cuts and Jobs Act (“TCJA”) passed in December of 2017. Designed to stimulate the economy and create jobs, TCJA reduced capital gains rates and lowered overall tax rates. To those of us in the trenches, lower exit taxes typically signal an increase in taxable exits. Lower taxes, in general, also give buyers more cash and buying power. Large corporate buyers (“C” Corps) will receive a windfall of extra cash from the corporate tax rate falling to 21 percent from 35 percent.

The volatility in public equity markets in early 2018 is also worth watching. It raises some questions about large public company deals which typically involve stock as currency. However, lower-middle-market private companies are not directly impacted by such swings and private buyers are still well-positioned to invest. Buyers — often smaller, strategic public and private buyers and private equity funds — are projected to be as aggressive as 2017, if not more so.

The chart below from the Citizens Commercial Banking®-Middle Market M&A Outlook for 2018 highlights expectations from both buyers and sellers in the middle market that valuations will remain stable or increase during 2018. 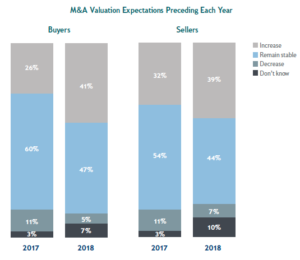 Record-Breaking Activity in 2017. Abundance of Acquisition Capital in 2018.

Debt and equity remain available and ROI expectations have generally fallen since the Great Recession of 2008. Well over $1 trillion in committed capital is currently sitting in private equity and venture capital funds worldwide. In fact, Ernst & Young recently conducted a survey of 500+ executives of companies with over $500 million in annual revenues and found that “73 percent plan to ‘accelerate’ deal making strategies” as reported in a Wall Street Journal article last month entitled “US Companies Poised for M&A Shopping Spree.” (March 20, 2018)

This combination of factors should result in higher valuation multiples paid to sellers. The abundance of acquisition capital (especially over the past 4 years) has led to a very favorable sellers’ market, which we feel will continue in 2018 … for now.

Timing the Market Is a Fools Game.

Trying to “time” any market, especially the lower-to-middle market sector of M&A is dangerous and even foolhardy. Deal values should continue to remain high throughout this segment, but sellers who are otherwise ready to transition should not necessarily wait for even higher valuations. The “window” of opportunity could (and will) certainly close at some point. All cycles come and go.

The length of a deal can be just as important as picking the right time to sell. Typical, well-prepared, auction sale processes usually take 6-9 months from inception to closing. Potential deal value can fluctuate in that timeframe, so it takes a concerted group effort among sellers, their M&A attorneys, investment bankers and accountants to obtain optimal results.

Things to Consider Before a Sale.

Experts estimate that a majority of small businesses, most of which are Baby Boomer-owned, will attempt a sale (as opposed to family succession) during the next 10 years. Potential sellers must be aware of this expected upsurge in competition in the marketplace as well as consider purchase price multiples, succession planning, health and family well-being, philanthropy and tax planning.

There is no “one size fits all” scenario for every seller, so if you are planning on an exit from your small business, take note that the clock is ticking.

If you are interested in discussing our experience or current M&A outlook, contact Michael Sweeney at msweeney@duffysweeney.com or 401.455.0700

Get a printable version of this blog post here.