Is The Window Closing on the Decade-Long Sellers Market? 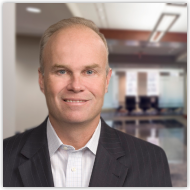 By Michael Sweeney | As we turn the corner toward the end of 2018, business owners and the professionals who advise them are wondering: Will the “window” finally close on the extended seller’s market after nine years or will 2019 set another record?

As we reported earlier this year in our April blog post entitled “Business Owners With Exit Dreams May Leverage Middle-Market Momentum,” 2017 was a record year for middle market (< $1 billion) and lower middle market (< $250 million) merger-and-acquisition transaction activity and valuations.

A Deloitte survey of 1000 executives at the beginning of 2018 showed that about 68 percent of executives at US headquartered corporations and 76 percent of leaders at domestic based private equity firms said deal flow will increase in the next 12 months. (From Deloitte: The state of the deal: M&A trends 2018.) 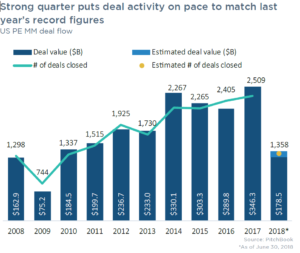 Through June 30th (Q2 of 2018), we have witnessed record-setting “exits” and continued strong fundraising activity in the middle market sector. This chart (Source: PitchBook) illustrates how 2018 activity is poised to match or exceed 2017 deal value.

In the nine years since the 2008 Great Recession, middle market M&A valuations/multiples have recovered and risen dramatically.

Moving forward, today’s middle-market business owners must recognize that the M&A market, including the middle and lower market, have historically cycled up and down in past decades. That being said, the “[multi-] million dollar question” remains: when will this current window close?

This second chart (Source: PitchBook) illustrates exit activity with the forecast for 2018 to exceed the 10-year average. 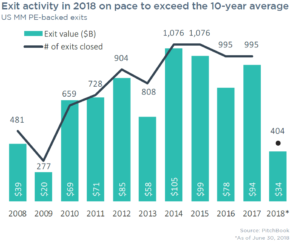 According to a March 2018 Reuters article, “Global mergers and acquisitions (M&A) had their strongest start ever in the first quarter of 2018, totaling $1.2 trillion in value, as U.S. tax reform and faster economic growth in Europe unleashed many companies’ deal-making instincts.”

Strong equity fundraising activity and abundant low cost debt financing combined with swelling corporate cash coffers (i.e. “dry powder”) also helped boost the confidence of chief executives, convincing them that now is as good a time as ever to pursue transformative mergers and PE buyers. This momentum and optimism has migrated down to the lower mid market (<$250MM) in enterprise value.

Many of our clients have taken advantage of the current market conditions in the past 5 years to position and sell their businesses at high valuations or build through added on acquisitions. Specifically, the liquidity/fundraising combined with the 2018 “C” Corp tax relief are now certainly fueling an extended seller’s market “cycle”.

Having said that, once the current cycle shifts back toward the 10-year average (or below) (higher interest rates = lower multiples), U.S. middle market business owners may not see the elevated valuations again for some time. The uncertainty of the market shifts/timing, and the opportunity cost of missing out on investments following the Tax Cuts and Jobs Act is fueling even more activity as we undoubtedly approach the conclusion of this strong 10-year run.

If you would like to discuss the state of the U.S. M&A market relative to your business, please reach out to me at msweeney@duffysweeney.com or 401-455-0700. Learn more about how Duffy & Sweeney LTD has assisted over 100 U.S. Middle Market companies successfully complete transactions since 2008, and see our tombstones of deals at our mergers-and-acquisitions practice page.