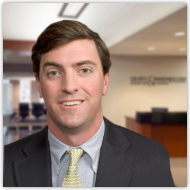 Ted joined Duffy & Sweeney as a third year law student in February 2006 and was the first associate to be hired by the firm directly out of law school. The law school-to-partner track at one firm is a great accomplishment that is, unfortunately, rarely seen in today’s law firms.

With over nine years of experience, Ted serves as corporate counsel to privately held businesses ranging from startups to middle market companies. He guides clients through every stage of the business life cycle from formation to eventual sale and regularly handles complex matters and transactions for them including debt/equity financings; commercial financings; commercial contracts; mergers, sales and business acquisitions; and executive and equity compensation.

Ted has been recognized in Super Lawyers as a Rising Star since 2013. He serves on several boards and committees, including the Newport County YMCA and the Providence Children’s Museum.

A resident of Middletown, Ted is a 2003 graduate of Bowdoin College where he earned a BA in Classics/Archaeology with a minor in Economics, and was captain of the men’s lacrosse team. Ted is also a 2006 graduate of New England School of Law. He is admitted to practice in Rhode Island and Massachusetts.